Different Metals show different reactivitie towards Oxygen (O2)
(i)  Sodium (Na) and Potassium (K) react so vigorously that they catch fire if kept in open so they are kept immersed in kerosene.
(ii)  Surfaces of Magnesium (Mg), Aluminium (Al), Zinc( Zn), Lead (Pb) are covered with a thin layer of oxide which prevent them from further oxidation
(iii)  Fe does not burn on heating but iron fillings burn vigorously
(iv)  When Copper is heated it does not burn but is coated with black copper oxide
(v)  Gold (Au) and Silver (Ag) does not react with oxygen

(B) Reaction of Metals with water (H2O)

>  Al, Fe and Zn React with stem
>  Na, K and Ca react with cold water
>  Mg react with hot water
>  Ca and Mg float as bubbles of Hydrogen stick to their surface
>  Pb, Cu, Au and Ag not react with water

Ionic Compounds
The compounds formed by the transfer of electron form a metal to a non-metal are called ionic or  electrovalent compound.
Physical Properties of Ionic Compounds
1- Physical Nature -  They are solid and hard, generally brittle.
2- Melting and Boiling Point – They have high melting and boiling point.
3- Solubility – Generally soluble in water and insoluble in such solvent like petrol or kerosene
4- Conduction of Electricity – Ionic compounds conduct electricity in molten and solution state but not in solid state.


Ores – Minerals that contain very percentage of particular metal and the metal can be profitable extracted from it, such minerals are called ores. 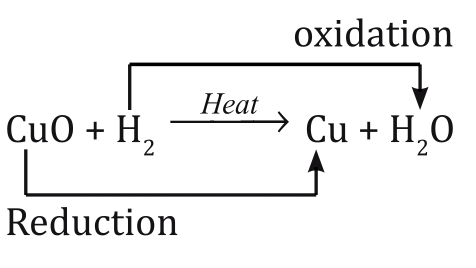